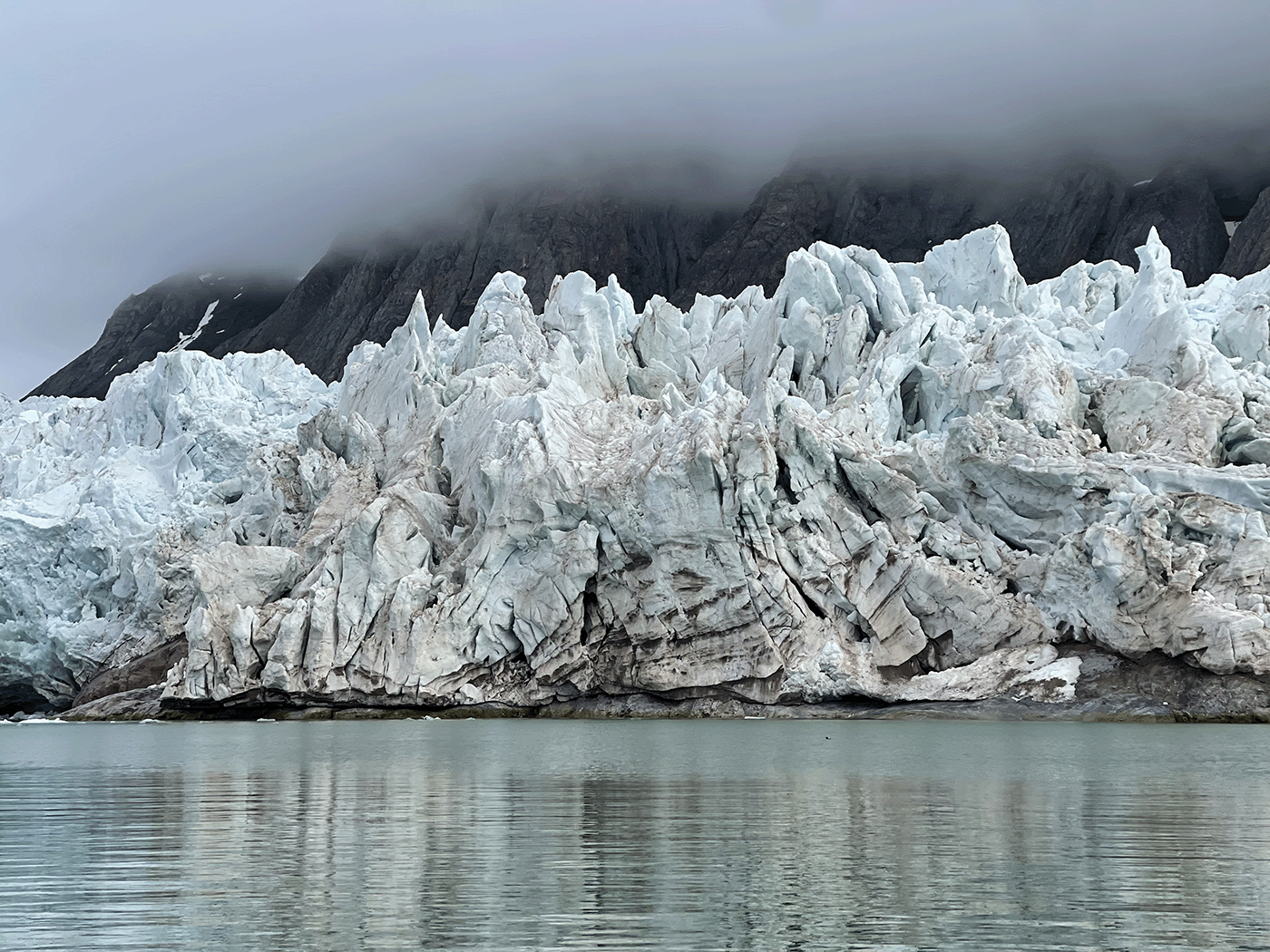 On most days there will be a morning and afternoon excursion using small boats, called zodiacs. Using these boats to go to shore, we will be able to hike with a professional land-guide trained in polar bear safety. While the hikes and landing spots will regularly focus on the area’s geology, they could also include significant cultural heritage sites, important bird migration locations, or large mammal viewing areas (e.g. walrus, seal, whale, reindeer, Arctic fox, polar bear). When shore landings are not an option, the zodiacs will take us on excursions through sea ice, on tours to view glacial cliff faces, and on journeys into fjords filled with icebergs.
As a tour company we value offering a full agenda and we will try our very best to stick to the timeline provided to you at the start of the trip. However, weather can be variable and may cause us to reroute or change the schedule completely. Additionally, we want to cater to the experiences of our participants as best we can! Just know that Adventure Geology Tours is 100% committed to providing you with a great experience.

What will the nightly geological lectures focus on?

The obvious start is an Introduction to Svalbard’s geology: Main tectonic episodes, paleogeography and paleoclimate through time. Why the geological map looks like it does: Precambrian, Snowball Earth, “Cambro-Silurian” tropic seas, Caledonian orogeny, Devonian old red, Carboniferous coal, deserts, Permian carbonate platform, Triassic changes between marine and the world history’s biggest delta, Jurassic and Cretaceos marine, the transpression collision with Greenland and the fold and thrust belt, Cenozoic deep marine clinforms, coal, Quaternary glaciations, and volcanism.
Svalbard as an analogue to oil exploration in the Barents Sea. We will take a look at source rocks and reservoirs in the field. If of interest to the group, we will look more into the oil exploration in the Barents sea, and the relationship with Russia.
Svalbard’s human history: From first Viking discovery of “sval bard” – “the cold coast” to today’s tourist and research industry. From “no man’s land” to the Svalbard Treaty. The importance of coal for settlement and during the cold war. Geology is a very important part of Svalbard’s human history. Without coal, Svalbard would likely still be pristine frontier area, like Antarctica today. The history of Pyramiden, Barentsburg, Longyearbyen. (Longyearbyen got its name from the founder, the American industrialist John Longyear, not from the year feeling long!).
Glaciers and climate change will be covered either in lecture, on on-site.
Each of these topics would then be explored in more detail in lectures when we are in the relevant areas.

How much does it cost?

While on the boat:

*per double occupancy; airfare not included

After booking through the contact form, you can use this PayPal link to securely submit your deposit or full payment. Please add 5% to your balance for money transferred by PayPal. If you’d rather avoid this fee, a check can be mailed.

Are there additional costs we should anticipate?

The airfare to and from Longyearbyan, Svalbard, Norway is not included. Additionally, you will have the cost of lunch/dinner in Longyearbyen on August 29 and dinner on September 29. You will have a free morning on August 30 pre-departure where you may want to visit a museum or go shopping. While you are on the ship you will have access to a bar for wine, beer, and spirits. You will keep a tab with the bartender and pay in cash (USD, Euro) upon departure.

The content of the trip can be altered for school or university groups who are interested in learning advanced concepts. Contact us for other educational opportunities.

Do I need to have knowledge of geology?

Nope. These tours are intended for people who are interested in learning about the formation of the unique landscapes found around Slavbard. A background in geology is not necessary to participate.

What is the required activity level for this trip?

To enjoy the trip we recommend that you be in good physical condition. Ideally, you should be able to walk 100 yards on uneven surfaces and have the ability to move your own luggage if needed. Additionally, you must be able to walk up ladder-style stairs to access the hull of the ship where the accommodations are located. There is also a ladder that must be accessed to get in and out of the zodiacs. Also, please remember that ships can be unstable if the water is unsteady.

Is there a discount for 3 or more people?

Discounts may apply according to group size and needs. We can accommodate groups of 13 easily, but can alter our transport (and schedule in some cases) to meet the needs of a larger group.

Do you accommodate dietary needs and/or restrictions?

Yes, we pride ourselves on being a service-based company and we strive to accommodate all needs with advanced notice.

Is there an age minimum?

Due to the rigor of the trip we do not recommend that children under the age of 12 participate in this tour.

What is the bathroom availability?

Each cabin has a sink, toilet and shower. Additionally, there is a bathroom on the main level near the dining area. Our land and sea excursions generally last 3 hours or less.

Upon trip payment we will send a detailed itinerary and a recommended packing list.

Adventure Geology Tours will follow in-country CDC mandates unless the group majority request otherwise. If a person contracts Covid while on the trip, they will need to quarantine from the group at their own expense.

What is the weather like in Svalbard at the end of August?

Temperatures will range between 46°F and 31°F with an average temperature around 38.5°F. Remember, that this is the Arctic. Svalbard is sitting between latitudes 74 and 81 degrees North and is bordered by the Arctic Ocean, the Barents’s Sea, and the North Atlantic.  Rest assured that we will provide you with a detailed packing list of essential gear to keep you warm.

Does it rain in Svalbard?

While August and September are higher precipitation months in Svalbard, the total rainfall per month averages 0.7 inches. In fact, most of Svalbard is an Arctic tundra whereby receiving less rainfall per year than most of the world’s largest deserts.

How much daylight will there be?

Late-August and Early-September are referred to as the season of the polar-sunset.  On August 29th there is nearly 20 hours of daylight with the sun setting around 11:00 p.m. By September 9th, the sun will set around 9:00 p.m. allowing for 16 hours of daylight.  The first zodiac expedition usually departs after breakfast and debriefing (~ 9:00 a.m.). The second zodiac expedition usually departs after lunch (~1:00 p.m.). We are always back to the ship by 6:00 p.m. to get ready for dinner at 7:00 p.m. Thus, we will have daylight to hike on land and explore. While not full-sun, the beauty of sailing during late-August is being able to witness a sky in perpetual sunset. (Beautiful pictures!)

Is the ship set-up to host expeditions?

Yes, the Antigua has shared cabins for 32-passengers and 8-crew members. The cabins are in the hull of the ship (see below diagram, bottom). Each room has a sink, and a bathroom compartment with a shower and toilet. The Antigua has been reserved through a family-owned Netherland company called The Tallship Company that has been in business for 30-years.

Is the ship safe?

The ship is equipped to safely sail internationally. The Dutch Shipping Inspectorate inspects the equipment on board and the ships’ seaworthiness annually. The ship sails in accordance with the International Safety Management (ISM) to ensure that all necessary procedures on board are implemented.

How big is the ship?

The stats and facts about the Antigua are listed below. These come from the Tall Ship Company website.

What type of food do we have on the cruise?

The chef will prepare three hot meals per day and an afternoon “sweet treat”.  As not to become redundant, the chef will make a variety of cuisines. The chef happily accommodates all dietary restrictions.

Do people get sea-sick?

This largely depends on your comfort-level of being in an ocean vessel. Typically, the ship is close to shore so that we can avoid harsh wave patterns. Most of the time we moore over-night in a fjord that is sheltered.

Will we be able to see wildlife while we are on our cruise?

All wildlife on Svalbard are active from May-September. Thus, the chances to see polar bear, walruses, seals, Arctic fox, and whales is possible. Svalbard is thought to have the largest polar bear population in the world. This is why the guides are expertly trained in polar bear safety and make the landings first before allowing guests.

Will we have geology and natural science interpretation during the cruise?

Yes, all of the land-guides are trained naturalists. Additionally, my friend and colleague, Dr. Karsten Eig, will be providing us with 8 lectures following dinner. Other lectures and interpretation will be provided by Beth Hitchcock. Bios to follow.

Arctic Circle Geology Tours supports diversity in the outdoors, international travel, and in the sciences. Unique life experiences and perspectives have a positive impact on our group travels. We do not tolerate racism, homophobia, transphobia, or xenophobia of any kind. We strive to foster inclusive and welcoming environments on all of our trips. Please do not hesitate to contact us with any questions or concerns as unlearning privilege and learning equity is a lifelong journey.